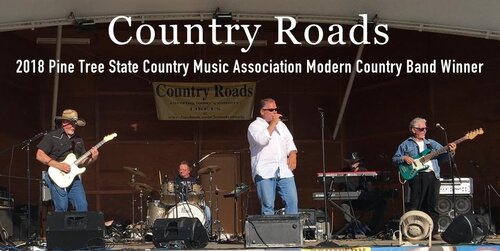 No OUTSIDE ALCOHOL on the property (Illegal) Bootleggers will be asked to leave!

Jamie Ruhlin joined Country Roads on Dec 15th, 2016. He is the former bassist and backup singer for the Tina Kelly Band.

Chris Biggar, originally from Wakefield, Ma. has been playing guitar since 1967. Since moving to Maine in 1997 he has formed two bands, The Rips, a classic rock band that performed in southern Maine for a few years
and Country Roads. Chris caught the modern country music bug after hearing Keith Urban’s, Somebody Like You.

Roger Gagnon, from Saco, Me. is a multi instrumentalist playing bass for Country Roads. He earn his music degree from the University of Maine in Augusta and produced and played in Rog & Ray, Patio Cowboys and the Corona Brothers.

Richmond Palmer, our keys player, also originally from Massachusetts, has lived in Maine for many years. After various musical projects while in his 20”s life took a different turn as it so often does. He has been playing again for a quite a few years now and performs in a large Jazz band as well as solo performances and is an original member of Country Roads along with Chris.

Mark performing at the Mohegan Sun Casino with the Heather Walker Thompson Band.
Mark has been drumming professionally in the southern Maine music scene for many years. He had the privilege of performing with Heather Thompson (Chase) for 3 years throughout New England headlining stages at venues such as the Mohegan Sun Casino, Fryeburg Fair and other Fair grounds from Maine to Connecticut. During those 3 years Mark had the privilege to share the stage with some top country stars; such as, Lee Greenwood, Jeff Bates, Jamie O’Neil, Phil Vassar, Little Texas, and Brother Trouble. Currently, Mark is drumming with Country Roads the Pine Tree State 2018 “Country Music Band of The Year”.